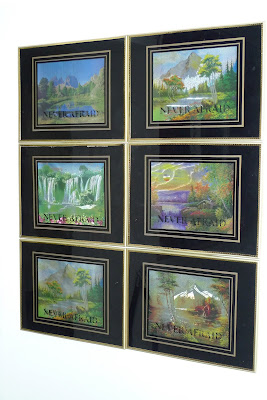 'Never Afraid', this maxim crops up repeatedly in Sarah Sparkes’s work and in fact, repetition itself, as a magical incantation or as ornamentation within the domestic environment, is a recurring theme throughout this exhibition. The artists varied use of materials, from painting, hand made wallpapers, adapted found materials and optical illusions, are linked by their implied underlying narrative. This is a reflection of Sparkes interest in what she refers to as 'domestic archaeology', a kind of 'finds processing’ in which fragmentary evidence is pieced together to shape a mythology from what is formless and unknown.

Sarah Sparkes at Crimes Town Gallery November 16, 2009by: Kate Weir for Spoonfed
... at the private view of Sarah Sparkes' Never Afraid show at Crimes Town gallery, patrons faced an altogether longer-lasting danger – that of being cursed for life.
Taking as her inspiration notions of superstition, the gender bias surrounding witchcraft and the general public's lust for free stuff, Sparkes created a 'cursed' film and produced 'cursed' artworks, which were given away for free to willing patrons. Artworks such as Roman Way and Photographers' House, are found paintings of forest landscapes and chocolate-box thatched cottages, adorned with Sparkes' 'Never Afraid' incantation and given a sinister psychological makeover with the addition of an unbreakable lifelong curse by Sparkes herself, no self-professed witch, but playing to the notion of women as supernatural harpies and artists as all-round mystifying folk to get her curse on.
The works are part of a larger exhibition which juxtaposes the safety and comfort of home (the gallery set up includes some of Sparkes' relatives' furniture), with the foreboding of omnipresent danger, stemmed only by the superstitious and misguided faith in talismans and incantations. Customised wallpaper featuring Sparkes' haunted cabin motif and a cosy living room setup is disrupted by a coffin nailed to the wall. Viewers have to take a quivering step over the threshold of death to view an infinity box through the coffin's peep hole. It shames me as a critic to admit that I haven't personally viewed the cursed film, or even succumbed to free artwork.
A proclivity for knocking on wood and with Giovanni Bragolin's creepy, flame-retardant, and reportedly cursed child paintings in the back of my mind, the primal fear of the unknowable, and well, cowardliness has overtaken my journalistic integrity. Lame perhaps, but also part of Sparkes' intention, to question why we cling to these superstitions in the face of logic. It's a brave move to make your collectors jump through such hoops, but ultimately the object takes on a legacy of its own, much like Dario Robleto's bone and Electric Voice Phenomena sculptures, and makes it that much more desirable; and that much more irksome for us scaredy cats.
Posted by Sarah Sparkes at 10:57 No comments: