The GHost Formula at FACT

The GHost Formula, was Sarah Sparkes New commission for FACT (Foundation for Art and Creative Technology), Liverpool. The work was created for the exhibition 'No Such Thing As Gravity' curated by Rob La Frenais.

Read more about the exhibition here 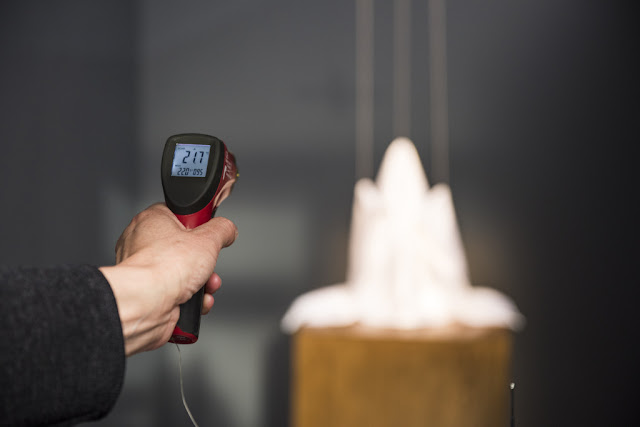 A multi media installation, the GHost Formula is a ghost research area, a visulaisation of  Sparkes' own research into ghosts as part of her project GHost. The GHost formula includes a central 'portal' - The GHost Tunnel, a reference library of ghost books from across disciplines, a collection ghost hunting equipment, The GHost Machine - a robot based on a neuroscience experiment, a website archiving Liverpool ghost stories and culture and various sculptural interventions.
Watch a short film about the GHost Formula here

The GHost Formula was supported with public funding by Arts Council England and by FACT (Foundation for Art and Creative Technology)
Partner organisations were The Museum of Liverpool and Williamson Tunnels Heritage Centre.

Posted by Sarah Sparkes at 05:41 No comments:

Tate Exchange: THE GIVE AND TAKE 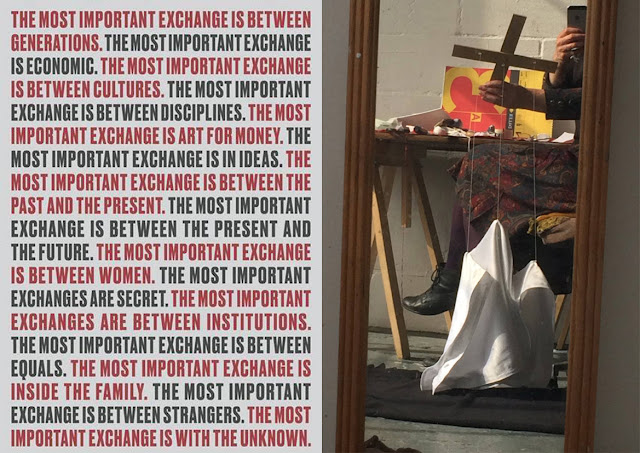 Posted by Sarah Sparkes at 04:33 No comments:

I am showing one of my 'portals' at Saturation Point's 5th Anniversary Exhibition. 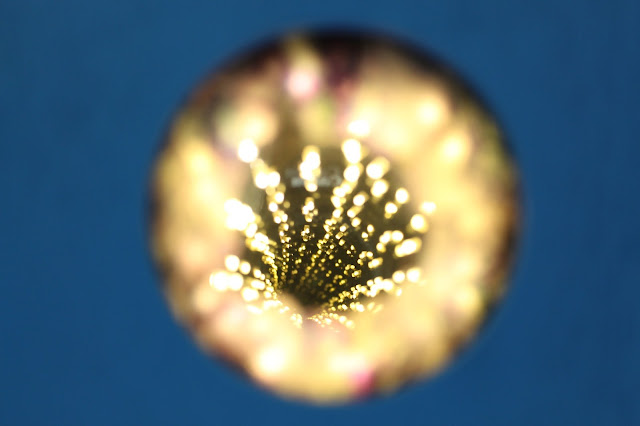 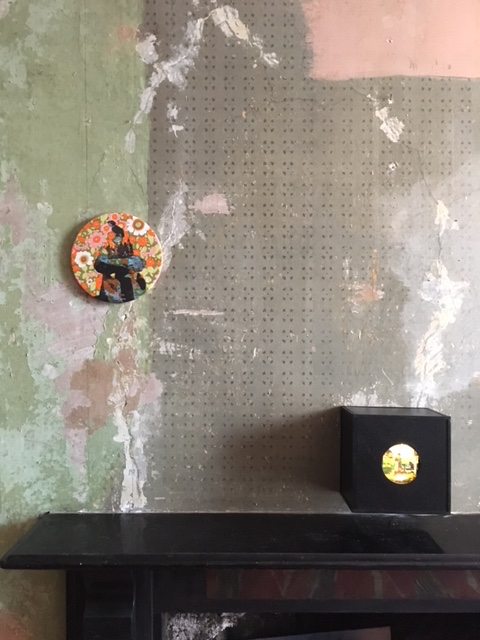 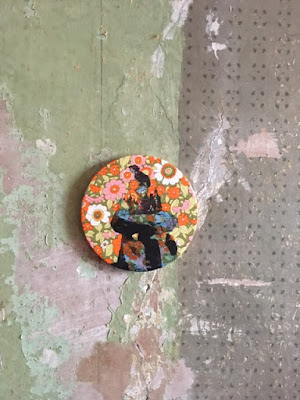 I am showing several pieces at Uncanny World of Interiors Exhibition, part of Plymouth Art Weekender.

Uncanny World of Interiors
6 Caroline Place, Stonehouse, Plymouth PL1 3PR
11am – 6pm Fri – Sun
Our interior space for living is where we are most revealed, as here we make our most personal mark. The temporary domestic space at Caroline Place showcases the work of 8 artists and designers working with everyday materials, transforming the mundane into objects of desire.
The unheimlich of Freud’s analysis wherein things pertaining to homeliness and domesticity are somewhat wrong footed by one thing or another, subjective to be sure, make us question what exactly ‘home’ is. A place? A feeling? A tribe we belong to? This is a subject that has substantial contemporary currency as migration and dislocation move cultures from places of conflict or through economic displacement. Small items may be carried from one place to another – or left behind, to be found later and integrated into the scheme of things. Such items and dislocation surface in the disrupted home environment of the Uncanny World of Interiors. 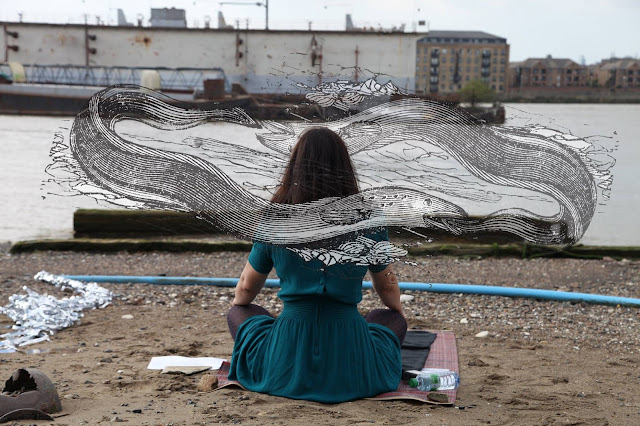 Be inspired to explore the city with new spirit and open eyes and join the InspiralLondon adventure. The festival ranges across London, inviting interventions, talks, discussion and exploration along the path of the InspiralLondon trail. For festival information and to book a place, click here.

Posted by Sarah Sparkes at 14:06 No comments:

Opening Party: SOLSTICE, 21st June 2016, 6pm
With talk from Chris Welch, Professor of Space Engineering at the International Space University in Strasbourg, France, where he is also Director of Masters Programs. Chris will be speaking about the representation of black holes and voids in space physics and science fiction.
We'll also be screening Sarah Sparkes film, Time You Need and DJ set by CAETVS

Sarah Sparkes will present a series of works exploring infinities, the void and it's intrusion into the domestic and everyday. FLUE was originally created for a hollowed out space, once a fireplace, for Other Rooms exhibition in Basement Arts Project Space, Leeds. For VOID exhibition, the artists has rebuilt the work within a dark recess below a cupboard in the Belfry of St John's.

Sarah will also be screening her film Time You Need (winner of the MERU Art*Science award 2015) on the VOID opening night, which explores the potential for consciousness to time-travel within the material limits of the human body. Using the symbolism of the portal and black hole, as they are conceptualised in both science, science fiction and the artists own work, the film presents a montage of narratives and documentation of performances and installations, which together with sonic and visual disruptions, create a liminal experience for the spectator. The proposition is that one may find, herein, the time one needs.

Jane Grisewood's Black on Black series explores darkness, blackness – the void – through different black paints on black paper. She will also be exhibiting Black Hole photographs, a typology of voids found in numerous locations around the world.  Grisewood, born and educated in New Zealand, worked as an editor/publisher in London and New York before studying fine art. She was awarded her PhD in 2010 at Central Saint Martins, UAL where she teaches experimental drawing, and has artist books in many collections, including Tate, V&amp;A, MoMA, MACBA, Brooklyn Museum and Yale. Working across media, she investigates time and transience through the line, repetition and durational processes, where drawing is key. Recent work is inspired by boundaries between earth-bound and cosmic temporalities, invisible and visible, black holes and cosmic web.

Melanie King's current research considers how invisible forces are represented in the field of both art and science. Melanie will present a series of experimental films exploring the bubble and its' relationship to cosmological theories such as the multiverse and inflation theory.  Melanie will be showing a series of cameraless photography prints, directing light onto photosensitive paper to create void-like impressions.
Posted by Sarah Sparkes at 16:32 No comments:

Keep your cool, at the ART CAR BOOT FAIR this year, with one of my FANNIES - hand held fans, hand decorated with UK and USA sign language.

Both USA and UK FANNY are represented in the finger alphabets of the UK and USA.

Available at the Kent Baton, curated by Nicole Mollett

London Art Car Boot Fair
Sunday 12th June, 12-6pm
Brick Lane Yard Corner, off Brick Lane and Buxton St, E1The Baton is exhibiting a series of handheld artworks this Sunday in London. In doing so, breaking the traditional gallery taboo that is the untouchable art object. A range of sculpture, prints, drawings and performances will be on offer, to be handled with care.
Bridgette Ashton  will present a series of prints from her collaborative project ‘Caves, follies, Grottoes and Hermitages’. Frog Morris will be performing with his Vegetable Puppets. Keep your cool with one of Sarah Sparkes’ ‘Fannies’ - handmade fans embellished with messages in sign language. Rosie James is showing her stitched drawings.

Handle one of Beth Lanning’s delicate animal skulls made from porcelain. Flick through one of Nicole Mollett’s smallest ever publications. Hazel Stone will be showing her ‘Summit Series, Collecting Mountains’ drawing on to wood. Ask nicely and Duncan Ward will let you hold his piece entitled ‘Snowball’ made from jewellery and gemstones found on the streets of London. Behold the detailed drawings of Paul Westcombe’s onto London train tickets. Jeanine Woollard will be showing her limited edition prints, 'Tales of the Jimba Jimba'.

For more info on the whole line up go to http://www.artcarbootfair.com/ . 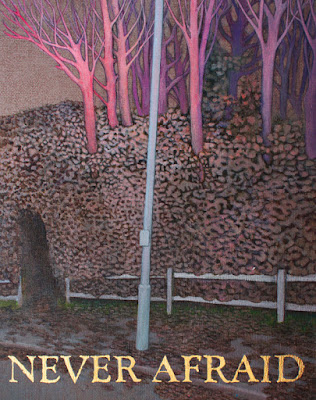 A selection of my NEVER AFRAID paintings will be exhibited at Emma Hill's Eagle Gallery as part of the group exhibition Gothic Pleasures.

Sarah Norris' Review of the Exhibition: Gothic Pleasures Review
Posted by Sarah Sparkes at 02:17 No comments: My work,'The Host Ghost' will be exhibited at:
The Blank Contemporary Art
Via Giacomo Quarenghi, 50
24122 Bergamo, Italy

Artists, who have previously worked with the Blank, have been invited to exhibit something that represents them. In my absence, I have sent my ghost

The exhibition is part of ARTDATE, a prestigious annual art event that takes place in many public and private galleries, museums and other venues across the beautiful city of Bergamo.

This year the theme and title of ARTDATE is 'The City of Crossed Destinies', based upon Italo Calvino's book'The Castle of Crossed Destinies' which features one of the oldest Tarot decks, the Colleoni-Baglioni or Visconti-Sforza tarot, which is held in the Accademia Carrar, Bergamo
My film, 'Time You Need', has also just entered the permanent collections of GAMeC (Gallery of Modern and Contemporary Art, Bergamo)

Posted by Sarah Sparkes at 02:26 No comments:

My film Time You need has entered the permanent collection of GAMeC,
The work will be part of the exhibition,
Atlante delle immagini e delle forme,
a group exhibition of recent acquisitions at GAMeC - Galleria d'Arte Moderna e Contemporanea di Bergamo

Posted by Sarah Sparkes at 02:37 No comments: 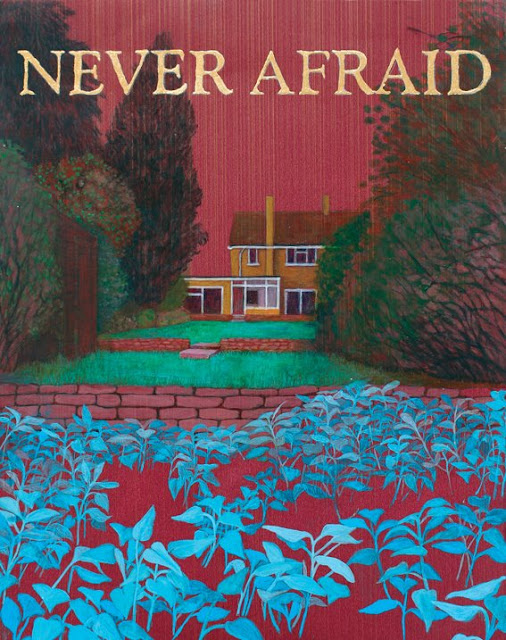 Posted by Sarah Sparkes at 07:28 No comments: