Two pieces of exciting news from my visual arts and research project GHost: 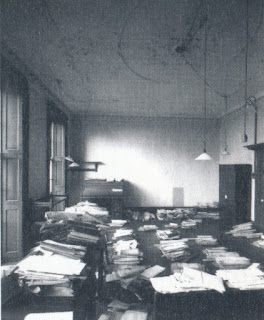 After years tied to the University of London, GHost is now wandering the earth and may turn up anywhere!
First up we'll be at  Domobaal gallery - not too far from our old home - with a special Hostings for Sharon Kivland's wonderful exhibition Reproductions II

Between 5.30-7.00pm, in response to Sharon Kivland's exhibition, Sarah Sparkes of GHost invites Birgitta Hosea, Peter Suchin and Sarah Wood to interrogate ideas pertaining to 'haunting' in both Kivland's work and the gallery space itself. This evening's Hosting will initiate an apocryphal archiving of Reproductions II – an immaterial revenant to haunt the invited guests.
Birgitta Hosea is a digital artist, and Research Leader for Performance and Course Director of M.A. Character Animation at CSM. Her current work investigates photographic manipulation and theatricality in Victorian Spirit Photography and mediumistic performances.
Peter Suchin is an artist and critic, contributing to Art Monthly, Frieze, The Guardian, and many other journals.

Sarah Sparkes is an artist, curator and researcher.  She leads the GHost project. Initiated in 2008, GHost provides a supporting platform enabling invited guests to visually and conceptually manifest and interrogate the idea of the ghost.
Sarah Wood is Senior Lecturer at The School of English, University of Kent. She is Managing Editor of The Oxford Literary Review and a founder of Angelaki: Journal of the Theoretical Humanities.
'GHost Hostings 10:  A Haunted Reproduction' will be part of a day of closing events on Saturday 16th February for Sharons Kivland's exhibition Reproductions II.  Places are limited and must be reserved in advance.  Please email the gallery if you wish to attend:  INFO@DOMOBAAL.COM

On the final afternoon of Sharon Kivland’s exhibition Reproductions II
We cordially invite you to an afternoon of select walking tours, discussions, book presentations and hauntings,
these events are all free however numbers are strictly limited and places must be reserved on a first come basis:
please contact the gallery. INFO@DOMOBAAL.COM

Secondly, a new call for two new Hostings GHost is moving in a new direction, the GHosts of the past can take us into the future as a unifying force - ghost comrades!!

GHost-dance: ghosts as cultural and political movement
GHost Hostings 11 and 12 a call for submissions

Call for papers, presentations, performance and dance for an interdisciplinary seminar and performance event – the so-called 'GHost Hostings'.   Hostings 11 and 12 take the GHost project's research in a new direction.

“Standing on the hill where so many people were buried in a common grave, standing there in that cold darkness under the stars, I felt tears running down my face. I can’t describe what I felt.  I heard the voices of the long-dead ghost dancers crying out to us.”
(Leonard Crow Dog, during the American Indian Movement’s occupation of Wounded Knee, 1973).

In the last decades of the nineteenth century, self proclaimed prophet Wovoka, of the Paiute people, became the figure-head for the Ghost Dance - a religious movement adopted by a significant number of the Native American Nations. Central to this belief was a communal ritualised dance, inducing a trance state, in which it was believed the souls of the dead and living would be reunited and their land returned to them. In the 1970s the Ghost Dance was revived as part of the Red Power Movement, with the activists group AIM (American Indian Movement) at its forefront, fighting for Native American civil rights. The ghost in the Ghost Dance was a revitalising force for a people whose land and loved ones had been taken from them and who were facing cultural genocide.

The Spiritualist movement in nineteenth century U.S.A provided a forum in which women, whose role in society was very much surpressed, could give voice to their opinions in a public arena. Appeals for women’s emancipation and the abolition of slavery could be expressed under the guise of a ghost voice, allegedly channelled through the medium.

At the same time in Europe, in the opening sentences of Marx and Engle’s Communist Manifesto, “A Spectre is haunting Europe – the spectre of Communism.” Communism could be said to have been conceptualised as a powerful ghostly presence, waiting to materialise and take shape within the living as a force for revolutionary change.

Submissions may address, but not be restricted to, one or more of the following:
·Ghosts as a political or cultural voice within marginalised or disenfranchised communities.
·The embodying of ghosts within ritual and performance to instigate socio-cultural or political change.
·Ghosts as a healing and unifying presence within marginalised cultural groups or genders.
·The appropriation of the ghost-dance, and other forms of spirit–possession, within contemporary art.
·The ghost narrative as a political device within rhetoric, writing, film, visual art or popular culture (fiction and non-fiction).

Please send a (working) title and an abstract of approximately 300 - 400 words, a brief biography and, if applicable, a couple of photographs or links to film clips documenting your performance or dance.

CHINESE OPEN > YEAR OF THE SNAKE 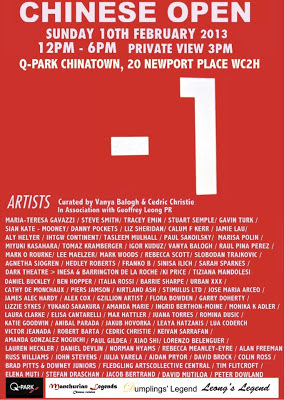 Posted by Sarah Sparkes at 15:31 No comments: