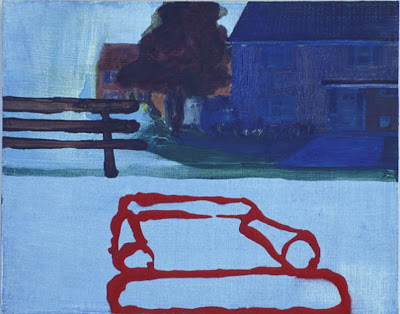 Sarah Sparkes 'Shopper' 1998 oil on board

The Eagle Gallery’s summer exhibition brings together five artists from different generations whose work is concerned with thought and memory.Nick Carrick’s paintings can often read as after-images, depicting the faded structures of fairground carousels and empty promenades, whose visitors have long departed. The images are loosely suggested, hovering between figurative associations and gestural marks held within fluid washes of primer.Tom Hammick’s paintings begin with what is local and known – a group of children standing in front of a holiday shack or a crescent at dusk. Whether celebrating moments of remembered intimacy or the isolation of man in the landscape, they speak with authentic feeling.
Sarah Sparkes says of her work that she paints ‘about returning, returning as an observer to places imprinted within the memory’. Her small-scale paintings on board combine illusory passages with structures (integral to the remembered scene) left as primed ground. These highly ambiguous areas give the paintings a quality of incorporating past and present.
Philippa Sutherland works both in film and paint and her recent canvases have a curious stasis. The subject matter is less the physical appearance of a real environment, than a projection of an interior world. Her images of mountains and rural retreats are depicted from a distance as if captured through a camera lens and held at a particular moment in time.Amanda Vesey’s images of ordinary moments have a poignancy that comes from close observation. People are shown walking their dogs or in the reveries of weekend pursuits but their fragility is sometimes hinted at. A landscape of yew trees and tents is overshadowed by the mass of a great mountain – it’s scale quite at odds with the temporary human dwellings.
Posted by Sarah Sparkes at 11:12 1 comment: