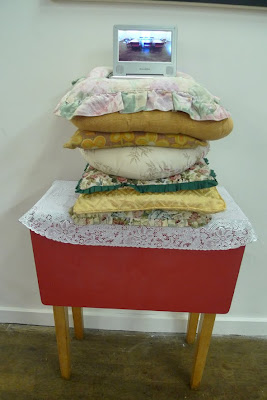 Sarah Sparkes, Deserters, 2009, 2 mins 36, dvd format Fri- Sunday 12-5pm Sarah Sparkes was the artist in residence at The Nunhead Community Centre during Nunhead Arts Week 2009. Sarah examined the absence of community at the the abandoned centre. The film Deserters was made during Sarah's residency and returns to haunt the community centre on a plinth, made from cushions left behind by the old people, on a tower a-top of Great Aunt Vera's Table.
This still from the film shows the portal I made inside a coffin at the community centre: 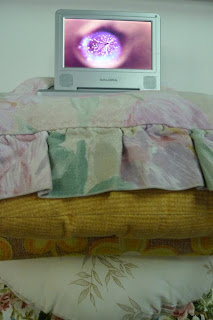 You can watch my film documenting the 'Deserter's Residency' below. The film shows the interventions I made in the space which were largely constructed from the furniture and objects left behind by the community. The bunting was from the silver Jubilee and was 'made over' by COTH (Sarah Sparkes and Simon Neville). I asked Derek Jordan to sing some popular war songs andit is his voice hauting the space:
Posted by Sarah Sparkes at 05:22